The 35th Annual Skip Hartman Memorial Niagara County Lake Ontario Pro-Am Salmon Team Tournament was held May 31 and June 1 out of the ports of Wilson and Olcott. The weather was near perfect, the fishing was very good, and it all came down to the wire in determining who the winners were when salmon and trout were weighed in at Krull Park in Olcott. After the final basket was put on the scales, it was a pair of anglers named Matt that won the first-place prizes.

Oh Baby/Irish Knots, a team lead by Matt LeClair of Plattsburgh, took top honors in the Professional Division with a score of 514.09 points for two days of fishing (based on 10 points per fish and a point per pound). They won a check for $11,000. Meanwhile, it was the Streaker team led by Matt Dunn of Newfane setting the pace in the Amateur Class with 265.56 points and earning a check for $2,000.

The team of Matt LeClair, Capt. Chris Yard of Pompey (Irish Knots), and Matt and Sarah Hill of Sherbourne came in with a tournament limit of 12 fish both days of the contest. However, there were 20 other teams who came in with a tournament limit, too. The key would be who could find the bigger fish. After the first day, LeClair and company were in Sixth Place with a score of 246.17 points. Leading the way was Vision Quest and Capt. Pete Alex with a score of 268.22 points. Big fish for the day in the Pros was a 21.22-pound king salmon caught by Capt. Jerry Felluca and Runnin’ Rebel/Legacy.

The second day, the Oh Baby/Irish Knots crew managed to score 267.92 points and move into the top slot overall. Second place in the Pro Division was Runnin’ Rebel/Legacy with a score of 506.96 points. They were in second place after the first day, too. They won $6,000 for their efforts. Third place went to Finders Keepers led by Tim Thomas of Ontario with a score of 502.54 points. They won $5,000. Fourth place was Vision Quest with a score of 496.45 points, winning $4,000. Fifth place was Fish Chopper led by Capt. Kevin Keller of Marietta with 487.53 points. They earned a check for $3,000. A total of 21 boats caught the 12 fish limit in the Pro Division on Day 2 as well. Big Fish for the day was Capt. Tom Pearse of Grand Island with the Summer School Team, a 20.71-pound king salmon. Both big fish prizes earned $250.

In the Amateur Division, the Streaker team didn’t have an easy time of it. All 19 amateur teams caught the 5-fish limit for the tournament on the first day, 17 on the second day. However, they had something going for them that the other teams didn’t – two father-son duos working together for a common goal. Matt Dunn was fishing with his father Marc (of Pendleton) and Doug Parker Jr. of Wilson had his father Doug Sr. from Lockport on board.

“Having the father and son action going for use made it really special,” said Matt Dunn. “The dads did great, too!”

Streaker was in second place after the first day with a score of 130.84 points behind Fishin’ Physician Assistant and Robert DeBadts with a score of 137.46 points. However, the Dunn’s and Parker’s went back to the same spot they hit the big fish on Day 1 and they connected on them early. They brought in a slightly bigger catch to take the top spot.

Big fish day one in Amateur Class was the Fishin’ Physician Assistant team with a 21.67-pound king salmon. Day 2 winner was Ballz Deep and Adam Austin of Gasport with a 21.31-pound king. Both earned $250 for their big fish titles. 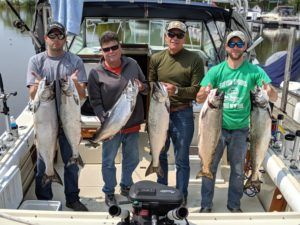 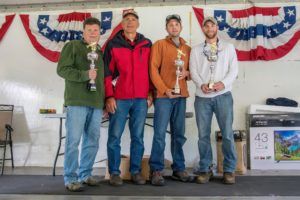 Am winner Matt Dunn of the Streaker team 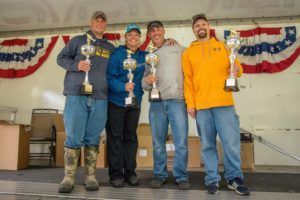 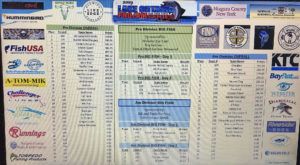 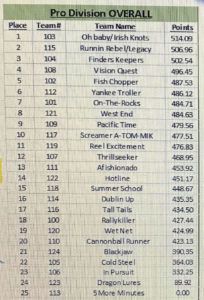 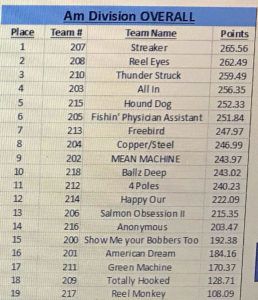 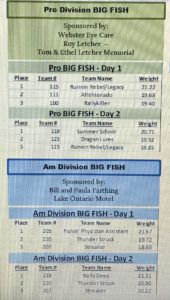