It was a fight reminiscent of Joe Frasier and Muhammad Ali in 1971 – two heavyweights battling it out for the prize, the 32nd Annual Lake Ontario Pro-Am Salmon Team Tournament May 20-22 out of Wilson and Olcott. The ring was Lake Ontario and the challenge was catching salmon and trout. The two opponents were Shark Tank led by Capt. Greg Gehrig of Oswego and Yankee Troller led by Capt. Rich Hajecki of Rochester, both worthy adversaries (along with 20 other pro teams). Near perfect weather doesn’t mean near-perfect fishing conditions and finding fish wasn’t an easy task for the trolling teams. They had their work cut out for them.

At the end of the first day and eight hours of fishing, only three 12-fish limits came to the scales. In the pro division, Yankee Troller connected with the first punch and topped the classic division with a limit catch of 12 Fish and an impressive score of 271.49 points based on 10 points per fish and a point per pound! However, second place was Shark Tank with a score of 221.76 points with only 10 Fish. Yankee Troller won the $1,000 big box for the Classic Division for the day. In the Trophy Class for best 5 fish, it was Shark Tank edging Yankee Troller 139.06 to 138.23. They traded punches and it seemed like it was a draw. But with two more days to go, it was still anyone’s fight.

On Day 2 in the trophy and classic divisions, Shark Tank won the round hands down. The team was a model of consistency as they won big box in both divisions, earning an extra $1,500 in doing so. The Trophy Score was 132.93 points, just over six points away from day one. The team’s Classic score of 219.66 points was only two points different from the day before. That said, the eye on the prize was the three day win and the Niagara Cup, but it wasn’t going to be easy. Fishing was a bit tougher as no limits came to the scales among the pros. However, Shark Tank did have 11 fish, a better number than the first day for them.

On Day 3, the first-ever three day Niagara USA Pro Am Tournament, Yankee Troller fought their way back big time. Their first “hook” was a 5-fish Trophy Score of 133.13 to give them a three day total of 350.73 points. With 11 fish in the box, the team’s Classic score was 238.30 points for the day, giving them a total score of 589.16 points and the lead for the contest. Shark Tank needed a score of at least 80 in the Trophy Division and 150 in the Classic to recapture the lead and take the win. As they approached the scales, the official observer’s log showed off eight fish. Would it be enough? It was! The Oswego team score 119 in the Trophy and 158 in the Classic to take both titles.

Shark Tank set the pace in both the five fish Trophy class (391.15 points) and the 12 fish Classic Division (599.45) and earned the Niagara Cup in both – winning over $29,000 in the process. They also won the ITO Flies big fish for the tournament with a 23.96 pound king salmon. Runner up in both divisions was Yankee Troller and it was a fight to the finish. They won over $8,000. Third place in Trophy was Dirty Goose led by Capt. Casey Prisco with 341.21 points. Fourth place was Team Thrillseeker led by Capt. Vince Pierleoni of Newfane with 338.05. Third place Classic team was Team Thrillseeker with 505.72 points. Fourth place was Free Spirit with 498.47 points led by Capt. Paul Czarnecki of Waterford, PA.

In the Amateur Open, Fishin’ Physician Assistant led by Abe Debadts of Rochester scored a three fish total of 88.49 points to win the day. He also had big fish for the Open at 23.90 pounds, a king salmon. The team won more than $1,500 in cash and product. Day 2 winner was Fisherman’s Daughter led by Greg Wiacek of North Tonawanda with a score of 72.52 points. He nipped Anonymous led by John Muehl of Maryland, NY with 72.47 points. Anonymous had big fish for the day with 19.89 pounds. In the Amateur Open for Day Three, it was Mean Machine and Kyle Hovak of North Tonawanda taking the day with a 3 fish limit score of 80.10 points. They also had big fish, a 23.12 pound king salmon. However it wasn’t enough to win the Amateur Open Cup for the best two days of team totals combined. That was reserved for Anonymous led by Muehl. He placed second on Day 3 with a score of 78.46 points and also placed second on Day 2 with a score of 72.47 points. A total of 28 teams competed in the Amateur Open Division.

For a complete rundown of the teams, check out the tournament website at www.lakeontarioproam.net. 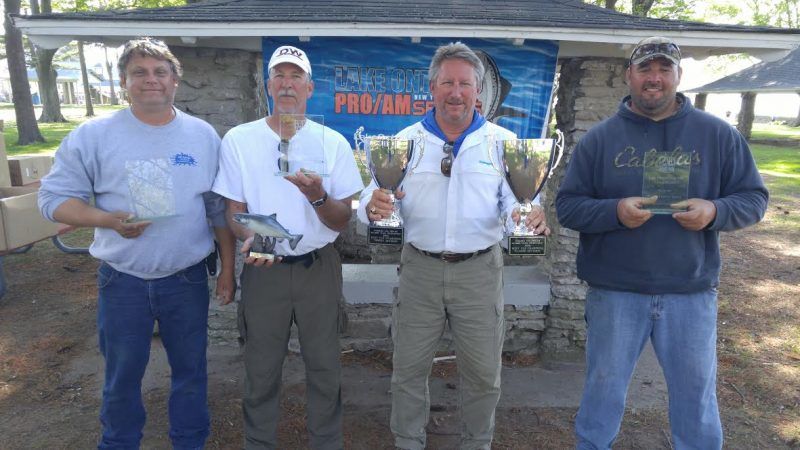